10 years ago, almost to the day, BCL Legal was born. In April 2003, James Batt, Vicky Clark and Mark Levine set up shop in Peter Street, Manchester with a clear vision in mind. Long hours, late nights, and incredibly hard work meant that three soon became four, four became five, and ten years later we have a new HQ, over 20 specialist consultants in 6 regional offices, and a sales support network behind us that most would be envious of.

Within those 10 years we have reached our goal to become the largest regional recruiter outside of London. And we're even starting to crack the big smoke too, with the launch of our London office at the start of this year.

So what better way to celebrate than a big team gathering which without fail the whole company always looks forward to. Last Thursday night, directors, consultants, support team and apprentices celebrated in style with a slap up meal at Rosso in Manchester and later cocktails at Room Bar. Looking back on the evening it was so nice to see the whole company mixing together, from different teams and different offices to managers and junior apprentices. We pride ourselves on our teamwork at BCL, and nights like this just go to show why we all get on so well.

In our 10 years in the legal market, close to 4000 placements have been made across private practice and in-house legal departments, with salaries totalling £135m. We are confident the next 10 years will be equally as successful, in fact better. We aim to build upon our existing relationships and hope to create many more along the way.

I'm sure if I dug deep enough through the BCL archives I could track down the original profile photos of the directors... But they seem to have temporarily vanished, so will have to make do with a Picture taken at the birthday meal 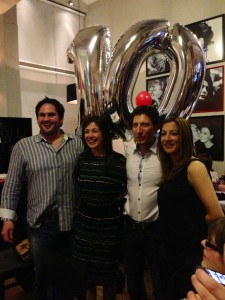